Our Campaign for Better Care

STATE OF PLAY: Ireland has the worst level of care for Juvenile Arthritis in the EU

There are currently 587 children on waiting lists for Paediatric Rheumatology at Our Lady’s Children’s Hospital Crumlin, with some children waiting up to two and a half years before treatment – representing a 400% increase in waiting list times sine the beginning of this year. The guidelines set out by the World Health Organisation state that children should be diagnosed and treated within six weeks.

The cruel aspect of forcing children to wait in pain for treatment is now having a detrimental long-term physical effect on the health of a generation of children whose life-long prognosis is being damaged by delays in care. Many will not recover from this neglect.

Juvenile Idiopathic Arthritis (JIA) is an auto-immune disease that affects approximately 1 in 1,000 children in Ireland – a rate similar to childhood diabetes. Children are left waiting for years in chronic pain that can result in long-term or permanent joint crippling – urgent treatment during growth is vital.

One of Ireland’s only two paediatric rheumatologists Dr Orla Killeen said, ”Every year we have a number of patients who present with damage that is quite extensive, and we know if we had seem them in a timely fashion there would have no need for the amount of joint destruction or loss of function or movement.

“Sadly, when we see a patient like that we know we may be able to get the inflammation under control, but we can’t repair the damage that’s been done. As adults, these children may not be able to work to their full potential, they may not have access to third level education, or if they do, they might not be in full time employment.

“The economic burden not only on families, but also on the state really needs to be looked at. All this goes back to access to care.”

iCAN is therefore calling for a third paediatric rheumatologist to be recruited along with a specialist care team.

iCAN is also calling for the consultant pediatric rheumatologists to be taken off the rota to cover general paediatrics and A&E in Our Lady’s Children’s Hospital, Crumlin.

iCAN chairperson Wendy Costello said, “Dr Orla Killeen and Dr Emma MacDermott need to be full-time in rheumatology. They have trained long and hard to become consultants in this field. Dr Killeen has set up the Paediatric Rheumatology department from scratch in Ireland. But they need the support, they need to stop being taken off rheumatology to cover general paediatrics; that can be done in a heartbeat and it would make a huge difference to the children on waiting lists in Ireland.”

Irish children with Arthritis dare to tell us their iCAN Hopes... 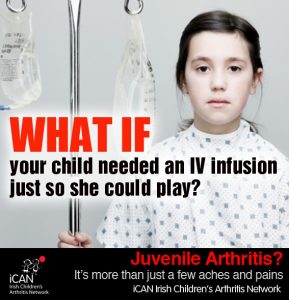 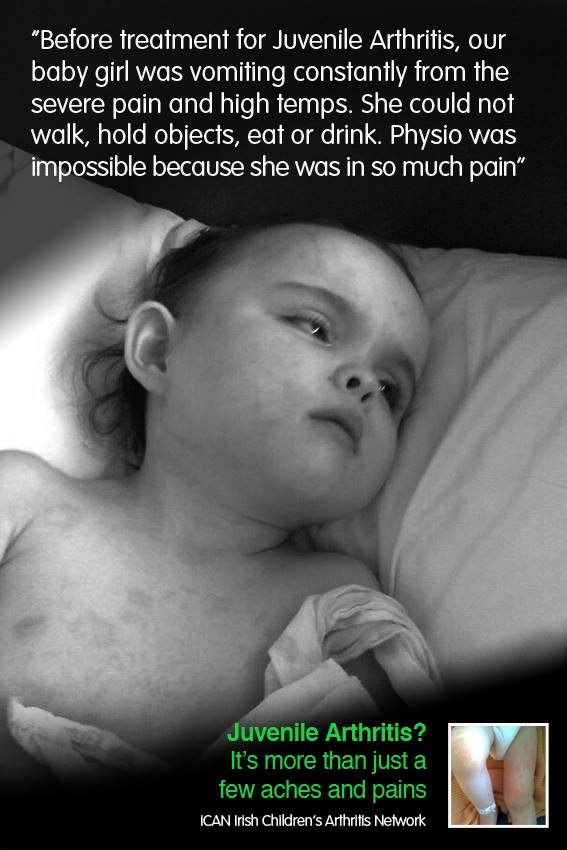 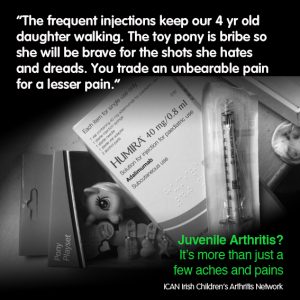 Over one thousand children and teens in Ireland are diagnosed with JIA, with numbers growing daily. iCAN offers help through our online support network, fimly days out and information days.

iCAN helps parents, children and teens navigate life with JIA by providing information on JIA through our online support network, our patient packs and information days.

iCAN is working to get children in Ireland better access to rheumatological. Currently, Ireland is at the bottom of the EU for paediatric rheumatological care. Our children deserve better.

HELP iCAN MAKE A DIFFERENCE TO CHILDREN WITH ARTHRITIS